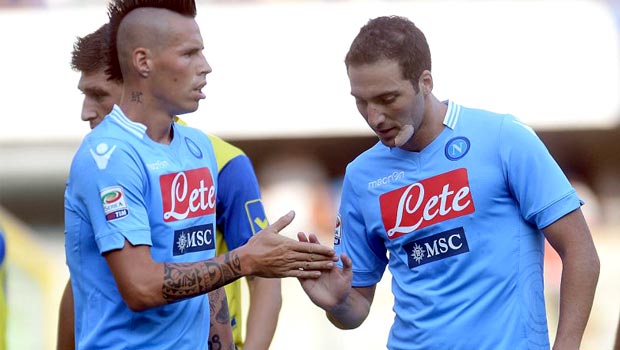 Napoli boss Rafael Benitez believes that Gonzalo Higuain and Marek Hamsik will be key if his side is to come out on top in Saturday’s Coppa Italia final with Fiorentina.

Higuain has been passed fit to play in the showpiece event following an ankle injury he picked up in the 0-0 draw with Inter last weekend.

The Argentinean has played a key role in his debut season with Napoli, who are priced at 2.16 to win with Fiorentina at 3.06 and the draw at 3.22, helping them to push for a Champions League finish as well as securing a place in the domestic cup final.

The former Real Madrid player will lead the side out as the Italian outfit look to crown off an impressive maiden campaign for Benitez.

Benitez has enjoyed success with his last four clubs, winning trophies with each one as he continues to enhance his reputation around Europe.

However, the Spaniard insists that victory in the cup final will not define whether or not the season has been a success.

Benitez said: “Higuain is feeling good, he is training without any problems. We will see how he reacts on the pitch tomorrow. He and Hamsik can make the difference on the pitch, they are a help to their team-mates.

“Winning the Coppa Italia would be important for the growth of Napoli. The season has been very positive with a new formation and new players. It’s pointless to look at Juventus, who have beaten their own points record.

” We really want to win, but in the event of a defeat it wouldn’t change my outlook on the season. If we do win it will be even better, but if we don’t nothing will change as far as my future is concerned.”