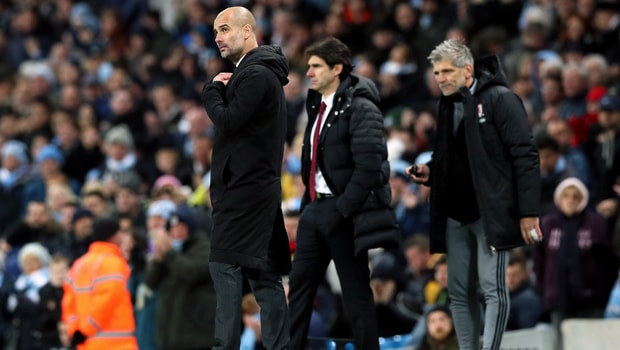 Manchester City boss Pep Guardiola says his side were guilty of missing their chances in the 1-1 draw with Middlesbrough at the Etihad Stadium.

The Citizens were dominant throughout the first half but had only Sergio Aguero’s 43rd minute goal to show for their efforts.

Middlesbrough responded with a spirited second half display and, despite the hosts having more chances to put the game to bed, they earned a point when Marten de Roon headed home a stoppage-time equaliser.

It means Man City have failed to win any of their last three home league games but Guardiola insisted his team was doing the right things, despite results.

“It’s part of the game,” Guardiola told Sky Sports. “We did everything, just like against Everton, but in the last minute with a cross they score.

It’s part of football, and we have to learn from that.” Aitor Karanka’s side defended deep for long spells, ensuring City were frustrated.

According to Guardiola, that is something his Manchester City players must learn to deal with if they are going to be successful.

“Opponents can play where they want, we have to find another way to solve that situation. But we made absolutely everything.

In the end, OK, we miss our chances, they don’t do absolutely anything, or a few things, and after one or two chances they score, and we have to learn about that for the future,” he added.