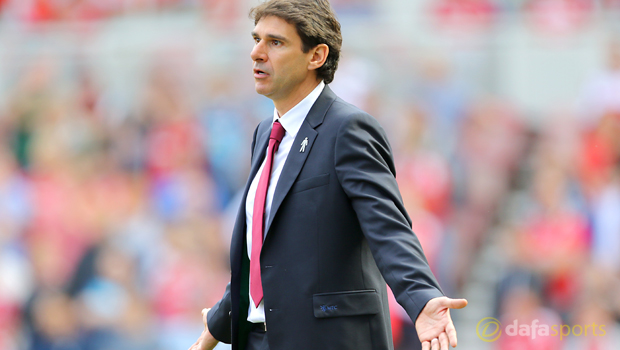 Aitor Karanka says that Calum Chambers is the defender he has been waiting on after he signed a season-long loan deal at the Riverside from Arsenal.

Chambers has been at the Emirates since Arsene Wenger paid Southampton £16m for his services in the summer of 2014.

He has earned three senior caps for England and made 58 first team appearances as a Gunners player.

Wenger has elected to allow the 21-year-old leave north London for a season following the arrival of Germany international Shkodran Mustafi from Valencia.

Karanka, whose Middlesbrough side are unbeaten in their opening three Premier League games, admits that Chambers was on his radar for some time.

The ‘Boro boss revealed that Chambers had other offers on the table and he thanked the player for choosing Teesside as his preferred destination this season.

“I’m really pleased. It’s a position where we’ve been working towards bringing the right player in,” Karanka told the Middlesbrough website.

“We haven’t been in a hurry, because Calum was the player we were waiting for and he’s going to help us a lot. “I’d like to say thank you to him because we know he had another offer, but he wanted to come here.

That’s important and we are looking forward to working with him.” Chambers will compete with the likes of Daniel Ayala and Ben Gibson for a slot in the Middlesbrough backline.

He could form an all-English partnership with 23-year-old Gibson, who has already impressed in his three top-flight appearances to date.

Middlesbrough have collected five points from nine on offer so far, leaving them sixth in the early Premier League running order.

The Riverside club are 5.00 to be relegated back to the Championship this season.