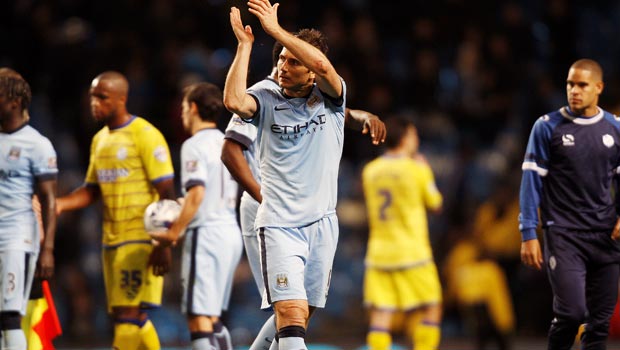 Manchester City manager Manuel Pellegrini says he was delighted with his side’s performance in the League Cup as they thrashed Sheffield Wednesday 7-0 at the Etihad Stadium in the third round.

It looked like it would be a tough night for the Citizens as they went in at half-time with the scores locked at 0-0, but some stern words from the Chilean breathed new life into the defending champions.

Frank Lampard, who scored the vital equaliser against former side Chelsea on Sunday in the 1-1 draw, started the rout as the midfielder tapped in from a low cross from compatriot James Milner.

Further strikes from Edin Dzeko and Jesus Navas were to follow before Yaya Toure stroked in a penalty to make it 4-0, an incident which saw Kamil Zayatte red carded for the visitors having conceded the spot kick.

One more goal each for Lampard and Dzeko added to the tally, the two strikes either side of an easy tap-in for debutant Jose Pozo, to ensure the scoreline was a 7-0 rout come full-time.

The results was well deserved for City, who turned on the style in the second-half and sent out a warning shot to the remaining teams left in the competition, and Pellegrini admitted they are focused on defending the cup this season.

“I really enjoyed that because tonight we saw the team that we were used to seeing last year,” he said. “It is important to try to retain the trophy, but the most important thing tonight was to play like we did.”

City, who will face Newcastle in the last 16, take on Hull this Saturday in the Premier League as Pellegrini attempts to close the gap on current leaders Chelsea.

They are favourites away from home at 1.56 to clinch the win, whilst Steve Bruce’s side, who were knocked out of the League Cup 3-2 by West Brom on Wednesday, are a big price at 5.79.