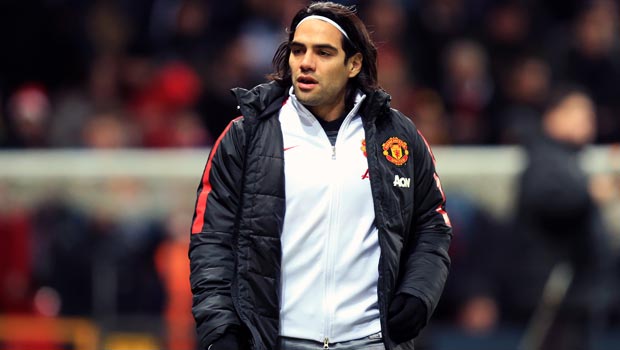 Radamel Falcao is in line to start for Manchester United when Sunderland visit on Saturday due to injuries to Robin van Persie and James Wilson.

Van Persie, who is United’s leading goalscorer with 10 goals, sustained an ankle injury in the defeat at Swansea City last time out and seems set to miss Saturday’s clash.

The striker had to wear a protective boot and left the Liberty Stadium on crutches following the 2-1 loss to the Swans.

United are yet to reveal the extent of the injury but he is expected to miss out against Sunderland this weekend.

Wilson, 19, suffered a dead leg in a reserve team outing on Monday and will be assessed by the club’s medical staff over the course of the coming days.

The teenage forward is not expected to recover in time for Saturday’s fixture, leaving boss Louis van Gaal with Falcao and Wayne Rooney as his only available forwards.

The Dutch manager has deployed Rooney in midfield in recent weeks but could move the England international back into attack to partner Falcao, although Marouane Fellaini is another option for Van Gaal.

Falcao has managed just four goals in 19 appearances for United and his long-term future remains the subject of speculation.

Van Gaal has indicated he may opt against sanctioning a permanent £43.2million move for the Colombian in the summer when his loan spell from Monaco comes to an end, while the French side have stated there are other options if he does not move to Old Trafford permanently.

However, Falcao seems set to get the chance to add to his tally against Sunderland due to the absences of Van Persie and Wilson.