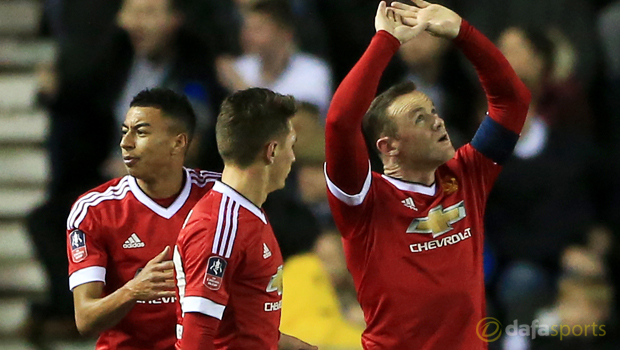 The England skipper is now just six behind Charlton’s total of 249 goals for the Red Devils, following his strike in Friday’s FA Cup fourth round victory against Derby.

Rooney has now scored 243 goals in 508 appearances for United and, despite his early season struggles, he now appears well placed to surpass the club record this campaign.

The 30-year-old has scored six goals in his last six appearances since the start of the year and he is hopeful his current rich vein of form can continue going forward.

He said: “It’s been a good start to the new year both personally and scoring goals. I’m feeling fit, and although the result against Southampton in our last league game was a bad one on a personal level I’m enjoying my game and scoring goals so hopefully that’ll continue.”

Rooney has already broken Charlton’s goalscoring record for England this season and he admits that it would be a great honour to surpass the United legend at club level as well.

He continued: “I’m well aware [of the club record]. Like the England record, when it was getting closer, it was coming up every week, so I’m sure it will now.

“But it’s great to be mentioned alongside Bobby’s record and, hopefully, before the end of the season I can pass that and kick on from there.”

Rooney will be hoping to edge closer to the record when Louis van Gaal’s side take on Stoke in the Premier League on Tuesday.

United are available at 1.70 to win the match at Old Trafford, whilst the Potters are priced at 5.50 and the draw is on offer at 3.60.