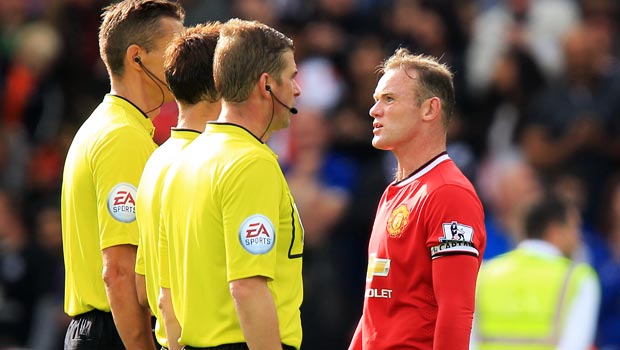 Manchester United captain Wayne Rooney has revealed he apologised to his team-mates for getting sent off in Saturday’s 2-1 win over West Ham at Old Trafford.

Rooney received his marching orders from referee Lee Mason for kicking out at Stewart Downing on the halfway line as West Ham tried to find an equaliser.

United were forced to hang on for over 30 minutes to clinch a vital three points that just about keeps them in touch with their rivals for the top four, but most of the post-match focus was on Rooney’s red card – the sixth of his career and third since 2009.

“Of course I did [apologise]. I think everyone knew [I was in the wrong],” he told United’s official website.

“It’s always tough against 11 men when you are a man down, especially when they are throwing a lot of balls into the box as West Ham were doing, so I am grateful that we held out.”

The England captain accepts it was a fair decision, but insists the foul was merely a misjudgement rather than a malicious act.

Rooney added: “It was probably the right decision. I saw the West Ham player making a counter-attack and I tried to break up the play, but I just misjudged it.

“I didn’t absolutely volley the lad. I tried to trip him up and, to be fair to him, he got further away from me and that’s why my leg is straighter than it should have been.

“As he pushed the ball away, my leg straightened out and that is obviously why the referee deemed it as a red card.”

Rooney will now miss the next three Premier League matches – against Everton, West Brom and Chelsea – after it was confirmed that United would not be appealing the ban.

Juan Mata now looks set to return to the United side in place of Rooney against the United skipper’s former club Everton on Sunday.

United are the 1.72 favourites in the 1X2 betting to earn a third straight home win while the Toffees are 4.85 to stun Old Trafford like they did last season when Bryan Oviedo scored the only goal.