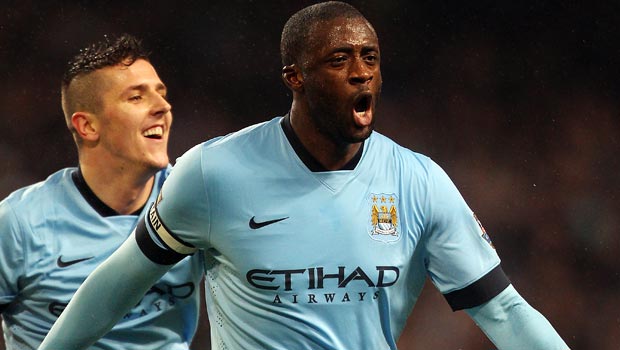 Manchester City’s Samir Nasri believes the confidence gained from helping the Ivory Coast win the Africa Cup of Nations will allow Yaya Toure and Wilfried Bony to inject a new belief into the side.

The pair were excellent in Equatorial Guinea, as the Elephants sealed their second continental title following a tense penalty- shootout win in Sunday’s final against Ghana.

They are now both back in England and are expected to feature in the Citizens’ next Premier League game against Newcastle later this month.

Toure’s absence has undoubtedly hit Manuel Pellegrini’s men hard with them falling seven points behind leaders Chelsea in recent weeks, while new signing Bony will give the side some potentially vital extra firepower.

After scoring in Wednesday’s 4-1 win at Stoke, Nasri spoke in glowing terms about the duo, whom he feels could play a huge part in City’s quest to retain their title.

“Especially after their win they will come back to us really happy,” Nasri told the club’s website. “I spoke a little bit with Yaya and it [winning the African Cup of Nations] was something he was waiting for for ages and now he has it and his head is going to be in the right place, and we know how important he is.”

“And Wilfried Bony we just hope that he is going to continue his run like he was with Swansea, scoring goal after goal and we’ll see at the end of the season.”

It promises to be a busy few weeks for City, with them also due to resume their Champions League campaign against Barcelona.

Despite the severity of their task, the English champions will be confident of getting one over on the Blaugrana, who beat them in the last 16 a year ago and victory over the two legs would only shorten their current price of 16.00 to win the tournament outright.