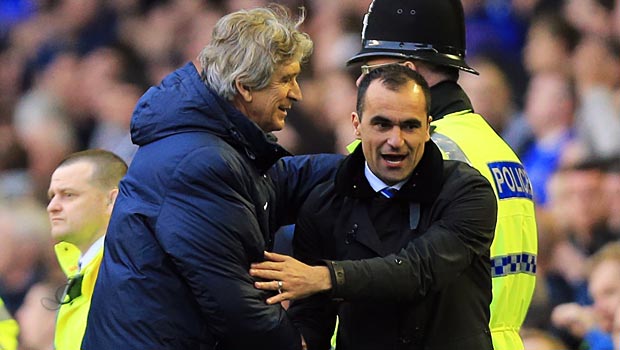 Manchester City boss Manuel Pellegrini insists the title race isn’t over yet despite their crucial 3-2 victory over Everton on Saturday.

The Citizens were under pressure to win at Goodison Park, and they got off to the worst possible start thanks to a sublime effort from Ross Barkley.

However, Pellegrini’s side changed the game with two quick goals from Sergio Aguero and Edin Dzeko. The Bosnian striker then found the net again before Romelu Lukaku’s late consolation goal.

City are now top of the table on goal difference, but the title will be heading back to Manchester if they can beat Aston Villa and West Ham United in their remaining two matches

Despite their strong position, Pellegrini insists there is still work to be done as he looks to win his second trophy as City boss.

“It is a really, really big step because to play here against Everton is really difficult. You can see that from the scores we have had here in other years,” Pellegrini told Sky Sports.

“The worst thing we must do is think that today we finished the Premier League.

“We have to play teams (Aston Villa and West Ham) who are not fighting for anything, they can play without pressure.

“We must try to win our last two games at home, then we will see what happens.”

Pellegrini was also quick to brush off questions regarding Aguero’s injury after the striker was forced off inside the first-half.

The Argentinean eased fans fears after the game by tweeting: “Thank you for your concern. I left just as a precaution. Fortunately I’m fine, happy for the goal, the win and keeping our dream alive.”

City are back to their free-scoring best and with Villa’s defence they could score several goals on Wednesday. They can be backed at odds of 1.90 to score over 3.5.