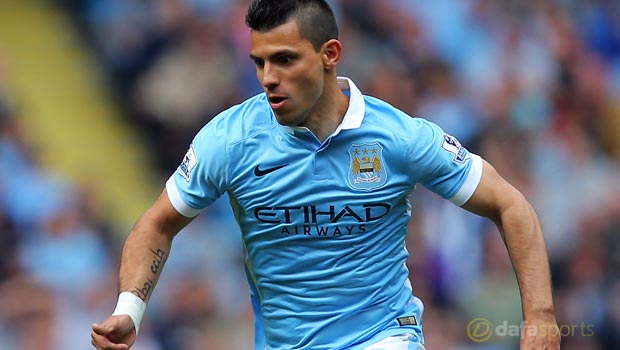 Manchester City will be without star striker Sergio Aguero for Tuesday’s Champions League clash with Juventus due to a knee injury.

The Argentina international picked up the problem during City’s 1-0 win at Crystal Palace and was substituted in the first half following a strong challenge by Scott Dann.

Boss Manuel Pellegrini felt Dann should have been sent off for the tackle and has been left counting the cost of the Palace defender’s actions after losing Aguero for the visit of the Italian champions.

The City manager says Aguero will sit out Tuesday’s game after being sent for a scan on his knee.

The Chilean feels that should the results show no major damage then the South American could return at the weekend.

There was some better news on the injury front for City in the form of David Silva and Raheem Sterling, who have both been cleared to return to action.

The duo missed Saturday’s win over Palace but took part in training on Monday and look likely to feature against Juventus.

New arrival Kevin de Bruyne could also play some part in the game after impressing from the bench at Selhurst Park.

Last season’s Champions League runners-up have stumbled out of the blocks in Italy, taking one point from their first three league matches.

Pellegrini says it would be foolish to judge Juve solely on their start to this season though, claiming they will be tough opposition.

“We play a very strong Juventus team – they reached the final last season and have won four titles in a row,” he said.

“Maybe Juventus didn’t start very well in their league but this is a different competition. They will be motivated.”