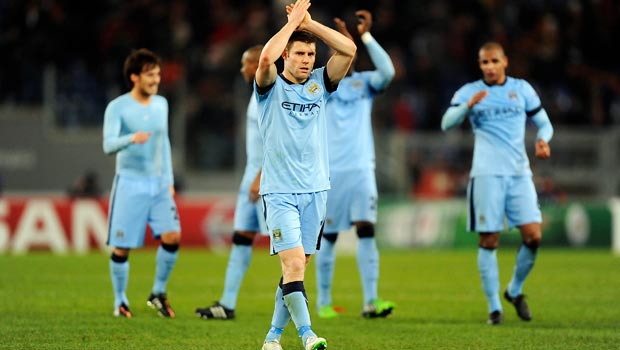 James Milner feels Manchester City are now ready to make a real impact in the Champions League after booking their place in the last 16 with a win over Roma on Wednesday.

Both teams went into the clash at the Stadio Olimpico knowing a victory would guarantee their progression into the knockout phases of the tournament and, after a bright start from the Giallorossi, second-half goals from Samir Nasri and Pablo Zabaleta saw the Citizens through.

The result marks a magnificent turnaround for the English champions, after a November defeat to CSKA Moscow had seen them looking almost certain to go out, only for wins over Bayern Munich and Rudi Garcia’s men to give them a place in the knockout rounds.

City’s achievement is made even more impressive when you consider that they won in the Eternal City without the likes of Sergio Aguero, Vincent Kompany and Yaya Toure.

And, despite their fairly poor record over the years in the Champions League, Milner feels his team are now ready to go and challenge for European glory.

“We will take it step by step but I definitely think the quality is there to go far in this competition,” he is quoted as saying by the Herald. “We don’t want to get ahead of ourselves, but the more seasons we play in the Champions League, and the more games we play in it, the experience helps and we get better as a team.”

Despite their sluggish form during the competition, City are still priced at a fairly favourable 13.00 to win the Champions League while they’re also the current 3.80 second favourites – behind leaders Chelsea – to defend their Premier League crown.