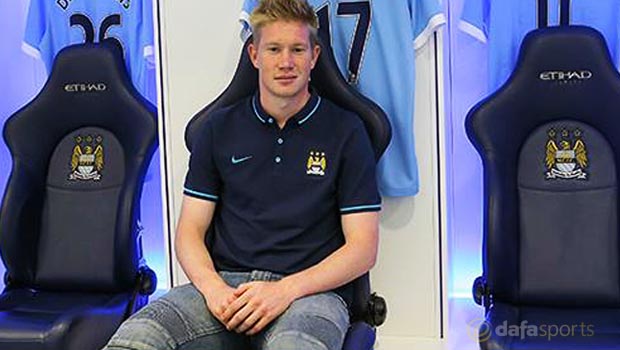 Manchester City have moved a step closer to signing Belgium international Kevin de Bruyne from Wolfsburg after the Bundesliga club admitted a deal is likely to be agreed.

Wolfsburg had been determined to dig their heels in to retain the 24-year-old winger, who proved vital in helping them chase home Bayern Munich last season after moving to Germany from Chelsea in January 2014.

Wolfsburg’s director of sport, Klaus Allofs, said earlier in the week the club were “in no rush” to complete any deal with City but the situation appears to have moved on after both clubs were represented at the Champions League draw in Monaco on Thursday.

“During Thursday, we have gone on with negotiations and we’ve got closer to each other,” said Allofs.

“He’s had an astonishing, astonishing offer from City and we can’t compete with that.”

“We had to take it seriously. Finally we decided to start negotiations with City,” added Allofs.

The Wolfsburg official said his club cannot compete financially, with de Bruyne turning his back on the Bundesliga side despite the prospect of Champions League football.

“I would prefer to keep him, not to get the money,” said Allofs.

“But the money now is really the issue because Kevin was qualified with Wolfsburg for the Champions League and he was a key player and took the next step.”

Last season, the Belgium international scored 10 goals and provided 21 assists in the German top flight after being deemed surplus to requirements by Jose Mourinho at Stamford Bridge.

City are 1.67 to lead at half-time and win their game against Watford at the Etihad Stadium on Saturday. The Hornets are 7.00 to record a fourth straight draw since returning to the Premier League and 15.00 to stun the league leaders with a win.