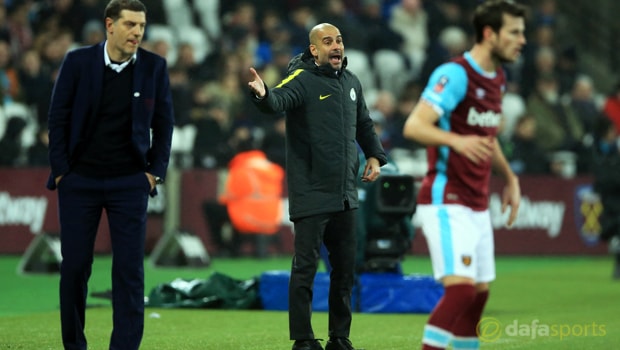 Manchester City boss Pep Guardiola hopes his side’s 5-0 hammering of West Ham in the third round of the FA Cup will help his players believe they can beat any team on their day.

The Citizens produced a convincing display at the London Stadium as they eased their way into the fourth round of the competition thanks to an own goal and strikes from Yaya Toure, David Silva, Sergio Aguero and John Stones.

Guardiola’s men have now won five of their last six matches in all competitions and the Spaniard hopes their latest victory can help restore some belief to his squad ahead of the second half of the season.

“It is important to win away, it is not easy,” Guardiola said. “Hopefully it can help us to make our players believe that they are good enough to play every game.”

City are currently fourth in the Premier League standings, seven points behind leaders Chelsea, while they will face Monaco in the last 16 of the Champions League next month.

Guardiola insists it is imperative his side believe they can win every game they play, otherwise they will struggle to meet their objectives for the season.

“I do not know what happened in the past but we are good guys, so all the season we run a lot, fight a lot, playing good, sometimes not playing good,” he added.

“But they have to believe they can compete everywhere against every team.”

City are priced at 6.00 to win the FA Cup this season, while they are available at 7.50 to claim the Premier League title and 11.00 to secure Champions League glory.