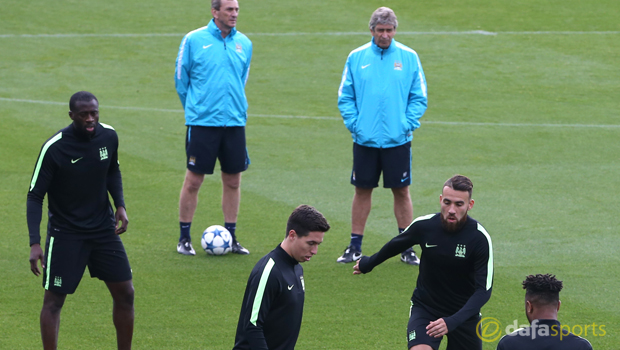 Manchester City boss Manuel Pellegrini says all thoughts of Sunday’s Manchester derby at Old Trafford are on hold until after his team face Sevilla in the Champions League.

City have one win from two Champions League games this term and the Chilean knows their fate in Group D is likely to rest on the double-header against last season’s Europa League winners.

Like City, Sevilla have beaten Borussia Monchengladbach and lost to Juventus, and Pellegrini is determined to pick up three points at the Etihad.

Asked if he felt City’s schedule had given them an advantage over neighbours United, who are in Moscow to face CSKA on Wednesday night, Pellegrini said that the weekend showpiece is not on his mind yet.

“Wednesday to Sunday you have a lot of days to recover,” he said. “We’re just thinking about Sevilla, not about United’s travelling. We just need three important points at home to try to qualify for the next stage.”

Unai Emery’s team have been labouring in La Liga this term, winning just two of eight games so far.

Pellegrini played down their domestic form and highlighted the recent win over champions Barcelona as evidence of how good Sevilla can be on their day.

“Maybe everyone thought that Sevilla would be better in the Spanish League at this moment,” he added. “Maybe they didn’t start well, but they beat Barcelona so it’s not easy.”

The City boss said he expects to see ‘the real Sevilla‘ at the Etihad Stadium and that he believes they will qualify for the Champions League again next season.

Man City are 1.68 to beat Sevilla with Wilfried Bony, who scored twice against Bournemouth on Saturday, 4.75 to get the first goal.