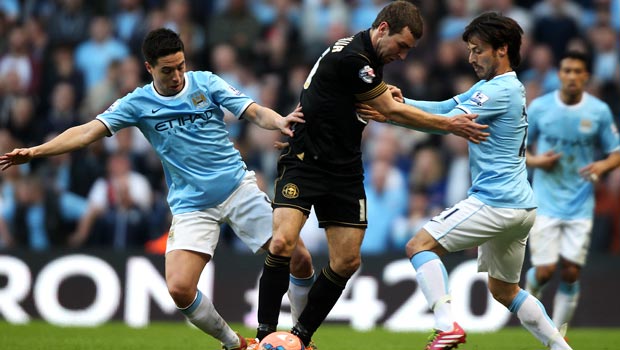 Samir Nasri is looking for Manchester City to use their shock FA Cup elimination at hands of Wigan as a catalyst to fight back from 2-0 down in second leg of their Champions League last-16 tie at Barcelona on Wednesday.

Manuel Pellegrini’s men were looking to follow up their Capital One Cup success against Sunderland with progression into the semi-finals of the FA Cup on Sunday.
However, Latics failed to read the script and emulated last season’s final success against the big-spending Citizens with a 2-1 win at the Etihad Stadium.

City’s Quadruple ambitions have now been cut down to a Treble, but they are the underdogs as they travel to Camp Nou this week trying to claw back a two-goal deficit in order to reach the quarter-finals.

However, Nasri feels the ideal way to put a huge disappointment behind them is to go and play in a big game and prove the Wigan debacle was a blip.

The France international added: “I think we have nothing to lose – just attack them from the start and try to score an early goal.

“For a game like this you cannot not be focused from the start.

“It is an amazing game and we can do something fantastic if we change the result.
“But we have to be focused and take this (Wigan) game as a lesson.”

Joe Hart, Vincent Kompany, Aleksandar Kolarov and David Silva started the Wigan game on the bench, while Fernandinho was not named in the squad so all five are expected to start at Camp Nou.

Pellegrini also confirmed that Sergio Aguero came through the second match of his return from a hamstring injury unscathed and he is also set to be involved.