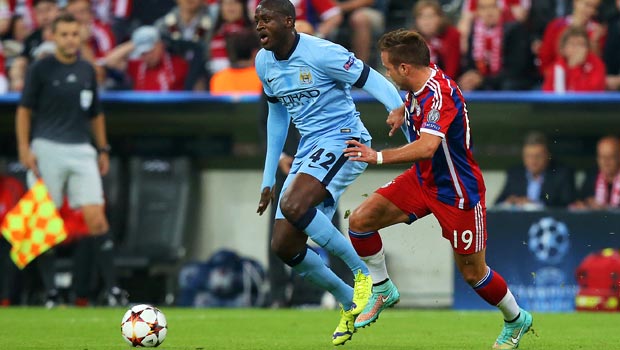 Manchester City midfielder Yaya Toure is hoping to win the UEFA Champions League this season to repay the club’s fans for their loyal support.

The Ivory Coast international has come under heavy criticism since Wednesday’s defeat to Bayern Munich.

Toure was described as ‘lazy’ by some sections of the club’s support, while fellow midfielder Fernandinho shone at the Allianz Arena.

The 31-year-old has a contract with the club until 2017, but his future was cast into doubt earlier this summer after his agent claimed the club had shown him a lack of respect.

Despite the claims, City boss Manuel Pellegrini has stuck up for the player and insists the Citizens will always support him after his recent personal problems with the loss of his brother.

He said: “Maybe he had a lot of personal problems with his brother.

“There are a lot of human things and maybe that is why he is not in his best performance at the moment.

“As a team, as a coach, as a club we must support him because he is a very important player, he makes a difference and I’m sure he will return to his best. But he is always being criticised.”

Toure is adamant he wants to repay the fans and he has targeted a Champions League win this season, with the club 16.00 to win the competition with Dafabet.

Speaking to the BBC’s Football Focus, Toure said: “I know the fans love me; they are always good to me.

“My target now is the Champions League. I want to win it for them.”