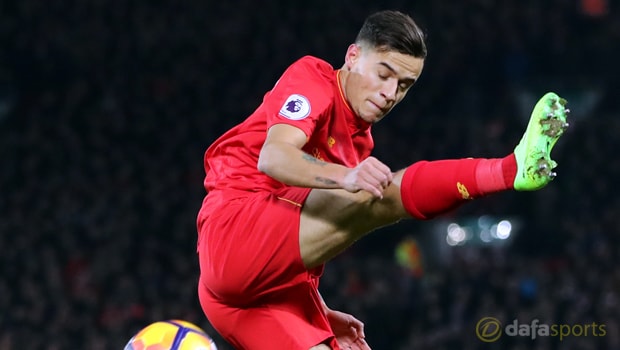 Liverpool midfielder Philippe Coutinho has urged his team-mates to not look past Monday night’s clash with Leicester City as they look to get back on track.

The Reds looked to be very much in the title race until Christmas but Jurgen Klopp’s men endured a miserable January which has cost them dear.

Draws against Sunderland and Manchester United stalled their progress before they were knocked out of both the FA Cup and EFL Cup.

They were also beaten by Swansea and Hull in the Premier League and Coutinho insists they cannot afford to make the same mistakes.

Klopp’s men last played on February 11 in a game but looked to have rediscovered some of their early-season form as they secured a 2-0 win over Tottenham at Anfield.

Leicester go into Monday’s home clash without a permanent manager after they sacked Claudio Ranieri in midweek, having lost five of their last six games in all competitions while they have not scored a league goal in 2017.

Despite their struggles which have seen the champions slip into the relegation zone, Coutinho is aware of the threat the Foxes could pose.

Coutinho told Sky Sports: “We have to get on the field 100 per cent focused and try to do the same as we did in the game with Tottenham.

“We have to be focused from the first minute. We were not 100 per cent focused in the Hull game. “I do not know why, sometimes it happens.

In the second half, we came back better but, of course, in the Premier League if a team plays a first or second half badly, it becomes complicated.

“What we have to try to do is the same as we did in the game with Tottenham. That game should serve as an example – play well from the first minute.”

Liverpool are 1.62 favourites to win the contest, with the draw 4.00, while Leicester are on offer at 5.50 to grab all three points.