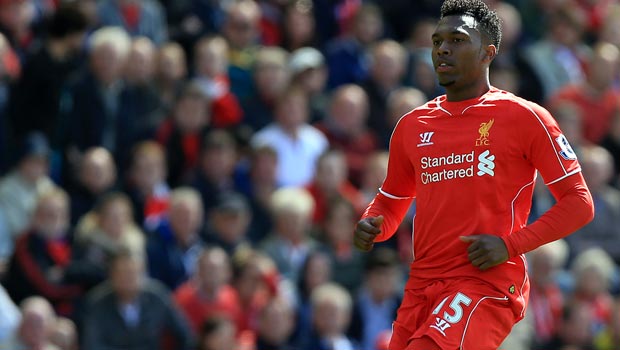 Liverpool boss Brendan Rodgers says key striker Daniel Sturridge could return to his side for the Merseyside derby against Everton this weekend.

Sturridge has been on the sidelines since picking up a thigh injury while on international duty with England and Rodgers admits he has been badly missed.

Since he picked up the injury, Liverpool have lost to both Aston Villa and West Ham, while it took a penalty shootout to see off Middlesbrough in the Capital One Cup in midweek.

Rodgers is desperate to get the 25-year-old back in his starting XI and will assess his fitness before making a late decision.
“We’ll be very happy to have him back and we hope that can be this weekend,” said the Northern Irishman. “We’ve got a number of injuries that we’re going to give every chance to.

“He (Sturridge) is a player who’s out on the field working. Him and a number of others we’ll just assess nearer the time. But if he doesn’t make it he won’t be far off after that.

“He’s someone that responds well to treatment. Obviously it’s gone well but there are still a couple of days to go before the game. The most important thing is he’s near to fitness.

“He certainly won’t be match-fit, he hasn’t played for a few weeks, but it’ll be great to have him back because he’s a wonderful player for us.

“He’s a great reference for our team at the top of the field, his pace and movement and quality, which we saw the last time he played against Tottenham.”