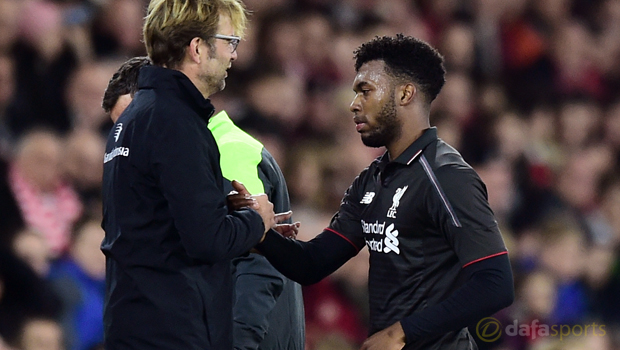 Liverpool boss Jurgen Klopp has admitted it will take time to get Daniel Sturridge reimmersed in the first team after the striker netted twice against Southampton.

The Reds swept aside their hosts on the south coast in a 6-1 Capital One Cup demolition to book a semi-final meeting with Stoke in the New Year.

Sturridge, playing for the first time under Klopp, scored two goals in four first-half minutes to help turn the game around after Sadio Mande has given Saints a first-minute advantage.

With Liverpool well on top, Klopp withdrew the England striker just before the hour mark and says it will be a case of softly, softly as he looks to build on his fitness.

And the German insists the 26-year-old is not injury prone, despite his recent woes.

“We will try all we can [to keep him fit]. Sometimes it’s bad luck. Even a long period can be bad luck. At this moment he feels good. He felt really good in the game and after the game,” said the Reds boss.

Klopp said he was very impressed with what he saw from Sturridge, having heard many good things but waited so long to see him in action for himself.

“It wasn’t too bad what Daniel did after his long break. I told him that I now know what everybody is talking about because I saw him live for the first time,” he added.

Liverpool are 2.50 to win the Capital One Cup this season with semi-final opponents Stoke 9.00.

Manchester City are 2.00 ahead of their semi-final with Everton, who are 6.00.