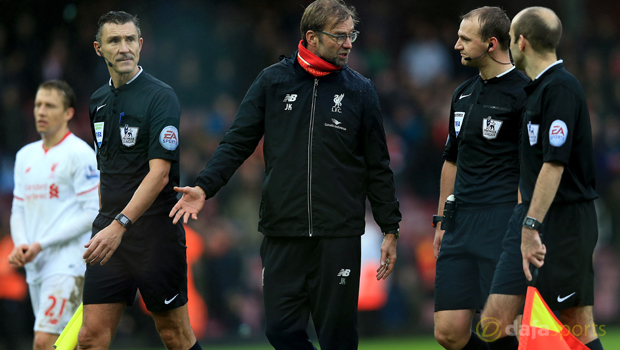 Goals from Michail Antonio and former Reds striker Andy Carroll saw Slaven Bilic’s men complete the double over the visitors to Upton Park, having won 3-0 at Anfield back in August.

Liverpool were second best for most of the match and the result further damages their top four chances.

Next up is the Capital One Cup semi-final first leg against Stoke at the Britannia, a game they are 2.50 to win, while the draw is 3.20 and the Potters 3.00.

They will need to produce a substantial improvement if they are to seal a positive result and, according to Klopp, their attitude will need to improve against Mark Hughes’ men.

Despite recording victories against the likes of Chelsea and Manchester City, the German’s reign has been littered by inconsistent displays and he still appears to be struggling to settle on his strongest team.

Although he tried to deflect some of the blame after the defeat at Upton Park, Klopp was clearly furious with his players and says they must raise the level of their performances.

“It was not enough from my team today. The decisive moments were there, but we were not there 100%.

“We could have done much better. We had our moments, we tried, but if you fight at 95 per cent then it’s not enough. It’s my responsibility.”