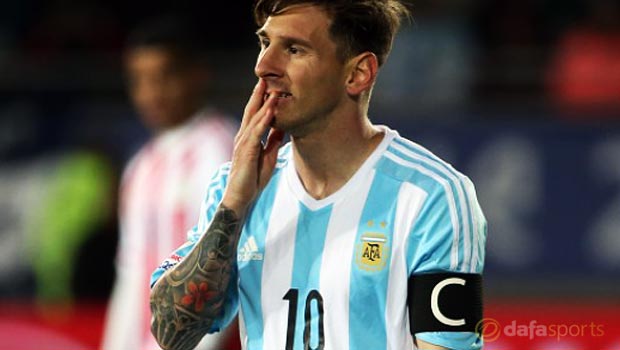 Lionel Messi accused his Argentina team-mates of falling asleep when allowing Paraguay to snatch a late 2-2 draw in their opening Copa America Group B clash.

The Argentinians appeared to be coasting towards a routine win at Estadio La Portada in La Serena as they took a two-goal lead courtesy of Sergio Aguero and a penalty from Messi.

But Gerardo Martino’s men found themselves on the back-foot when a fine strike from Nelson Valdez halved the deficit.
The former Borussia Dortmund striker Lucas Barrios then grabbed a 90th-minute equaliser in a frantic end to the game which saw both sides squander chances.

The equaliser reawakened concerns about Argentina’s ability to triumph in Chile and win a first major tournament in 22 years.

The defending champions Uruguay opened their campaign with an underwhelming 1-0 win over Jamaica on Saturday and Treble winner Messi said his team-mates were in no doubt about the importance of Tuesday’s game against Luis Suarez’s men.

“To be leading 2-0 and to end up with a draw makes me angry,” the Argentina captain told reporters.

“Looking at it now, you have to say that the Uruguay match is one we absolutely have to win.”

Argentina still have to play Jamaica in their final game and a win over the Uruguayans could give Martino’s men hope of topping the group – and avoiding a possible quarter-final meeting with Brazil.

“We played well in the first half, but we fell asleep in the second,” Barcelona superstar Messi added.

“We should have put the game to bed when they came on to us. In the first half we completely dominated possession, but in the second Paraguay took the ball away from us.

“Obviously it’s frustrating to be held to a draw after being 2-0 up, but we have to move on, think about Uruguay and improve. We have to keep the ball a bit more and manage the game.”

Argentina are currently priced 1.62 in the match betting and the draw outcome is quoted 3.80.

Uruguay are available to back in the 90 minutes market at 5.50.