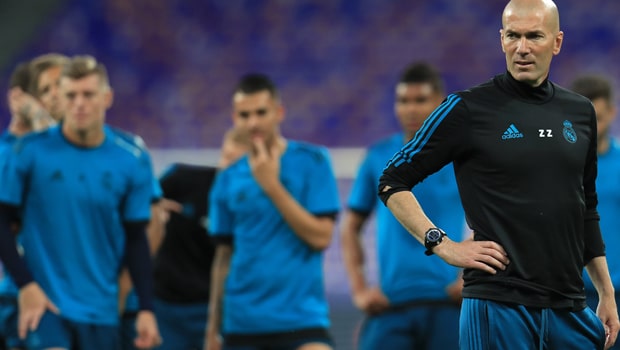 Coach Zinedine Zidane has defended his Real Madrid players after they lost their ninth La Liga game of the season with a 2-1 reverse to Valencia on Wednesday night.

Although a setback, the loss to goals from Goncalo Guedes and Ezequiel Garay should not prevent Los Blancos from qualifying for next season’s Champions League as they sit third in the Spanish top-flight table with an 11 point lead over fifth-place Valencia.

Karim Benzema netted an injury-time consolation for the capital giants in what was Zidane’s first defeat since returning to the Bernabeu, and the French tactician felt his charges put in a decent shift against an in-form Los Che outfit.

“We started the game strongly with good possession, pressing high up. We just needed to get that first goal,” he told the club’s official website.

“I can’t blame the players for anything, they really tried hard. We played against a top team. It’s a defeat and defeat always hurts.”

Next up for Real is a home clash with Eibar on Saturday, with the hosts priced at 1.30 to take all three points and Eibar on offer at 9.00.

It remains to be seen if the European champions can close the five-point gap to second-placed Atletico Madrid in their remaining eight matches but, whatever happens, Zidane has made it clear that he will work tirelessly to ensure they hit the ground running next season.

“This is a tough run for us, the whole season has been hard going,” he added. “Now I need to take control of my team and get us playing better next time out.

“The players are ready to fight until the last and we want to end on a high in preparation for next season. We are going to leave no stone unturned.”