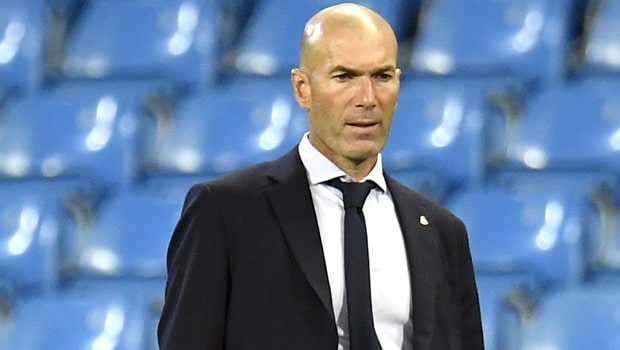 Real Madrid manager Zinedine Zidane has shown his frustration at the La Liga for letting his team’s Saturday match at Osasuna go ahead.

Zidane’s men travelled to Osasuna on Saturday and could only get one point with a 0-0 draw in a snowy and breezy condition at the struggling side.

The game was put into doubt with Spain’s most intense storm in 50 years, Storm Filomena but the match went on irrespective.

Both teams struggled to create clear-cut chances, but Real Madrid had two goals cancelled because of Karim Benzema’s offside in both situation.

Skipper Sergio Ramos and Karim Benzema had found the net, but none of their goals stood.

The groundsmen at Osasuna had to clear the pitch before the game and at half time, a situation which Zidane says is hard to play under and that the game should have been cancelled.

“Yes, clearly. It’s very hard to play under these conditions, but in the end, the decision was made that we should play and we all saw the match that we got. No [it wasn’t the right decision to play the game], but at the end of the day we have to do what we’re told.”

The result means that League leaders Atletico Madrid lead Real with 1 point despite not playing. Their game against Atletico Bilbao was called off due to snowy conditions.

In other matches, Barcelona beat Granada 4-0 as Lionel Messi, and Antoine Griezmann scored a brace each.

Barcelona is now on an eight-match unbeaten run, and Lionel Messi now has 11 goals to top the scoring chart in the La Liga.

Sevilla and Real Sociedad have played a thrilling 3-2 win for the Seville side on Saturday with four goals coming in the game’s first 20 minutes.

Youssef En-Nesyri scored the winner as his hat-trick secured all three points for Sevilla.