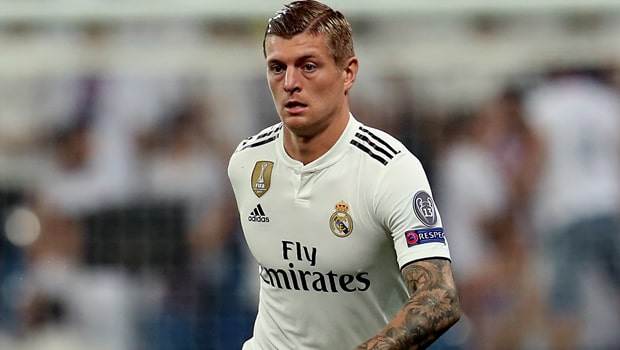 Toni Kroos says he will fight to hold onto a regular place in Real Madrid’s starting line-up after putting pen to paper on a new four-year contract.

It is expected to be a busy summer for Real in terms of both comings and goings, but German international Kroos has ended speculation over his own future by signing extended terms.

The likes of Paul Pogba, Eden Hazard and Kylian Mbappe have been heavily linked with a move to the Bernabeu and Kroos admits he would welcome the extra competition for places, although he is confident he will be able to hold onto his own place in Zinedine Zidane’s starting XI.

Asked particularly about Pogba’s potential arrival in Madrid, Kroos told reporters: “We can talk about many names. I like this player but nothing changes for me.

“I will continue doing what I’ve done all these years, fighting for my place, playing well, and when I’m at a good level I think I have no problems.”

Real endured a disastrous 2018-19 campaign by their own high standards, finishing in third place and a full 19 points behind champions Barcelona in the La Liga standings, while they were dumped out of the Champions League in the spectacular fashion by Ajax at the last-16 stage.

Kroos, who has been with Los Blancos since 2014 and has won 11 major trophies during that time, admits Real must improve next season, although he is confident they can return to winners’ circle on a regular basis.

“It’s a very happy and very special day for me,” Kroos added. “I’ve had a lot of success with Madrid, and I’m sure we’ll have more in the coming years.”