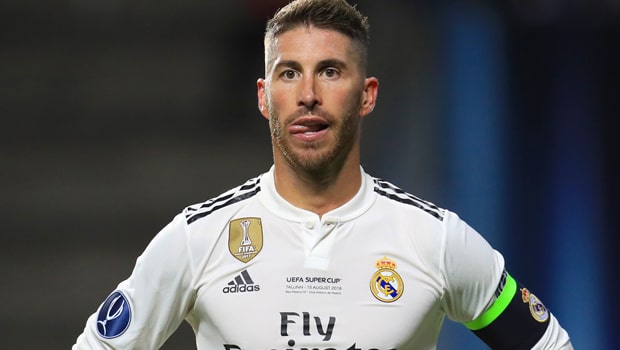 Sergio Ramos insists he has turned down an offer to play in China as he wants to end his career at Real Madrid.

The 33-year-old has been with Los Blancos since leaving Sevilla in 2005 and made more than 600 appearances in all competitions, scoring 84 times.

The centre-back has also been capped 163 times by Spain while he wears the captain’s armband at both club and international level.

Ramos has lived and breathed Real for the past 14 years and enjoyed incredible success at the Bernabeu, with four La Liga titles and the same number of Champions League crowns on his CV.

The tough-tackling stopper also has a couple of Copa del Rey titles under his belt and has been part of four FIFA Club World Cup-winning sides.

He has been linked with a move away in recent seasons, with Premier League Manchester United’s name mentioned on more than one occasion.

Ramos has always shunned attention from other clubs but rumours surfaced recently that he was considering a switch to the Far East. However, that will not be happening as the pull of the Spanish capital is too much for the veteran.

“It is true that I have an offer from China on the table, I will not lie about it,” he said.

“My dream is to retire here. “At no moment did I consider going to China. Yesterday I went to see the president to make everything clear. “I told the president that I would never go to a team that could compete with Real Madrid.”

United could certainly do with Ramos in their defence and the Old Trafford outfit can be backed at 19.00 to win the Premier League.