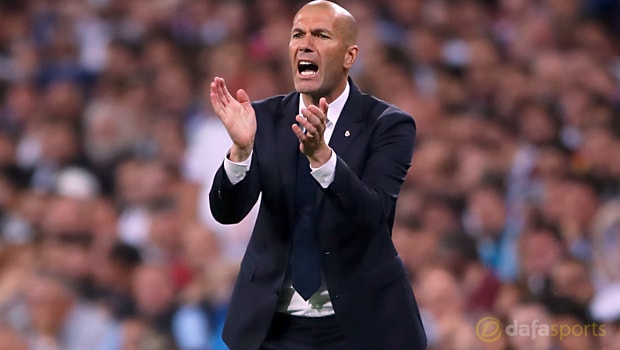 Real Madrid coach Zinedine Zidane insists his side are in for a tough night when they take on rivals Atletico Madrid in the Champions League semi-finals on Tuesday night.

Real are the current holders of the competition after beating Atletico last season on penalties, while they also beat their rivals 4-1 after extra time in 2014.

Despite their previous successes, Zidane admits his team will be pushed all the way by Diego Simeone’s team when the two teams meet at the Santiago Bernabeu.

Speaking ahead of the tie, the Frenchman said: “It’s a completely different tie and they will be doing their utmost to go through as well.

“The strength they have is that they never give up, no matter what happens. They fight, battle, they know their strengths and use them as best they can.

“In the past four or five years they have been a very good side that have improved every year.

“What happened in the past is in the past, we can’t rely on that now. The extra motivation comes from it being a Champions League semi-final.”

Zidane will be without forward Gareth Bale, with the former Tottenham star struggling with a calf injury.

Simeone are without three defenders with Jose Gimenez, Juanfran and Sime Vrsaljko all out and winger Yannick Carrasco is a doubt.