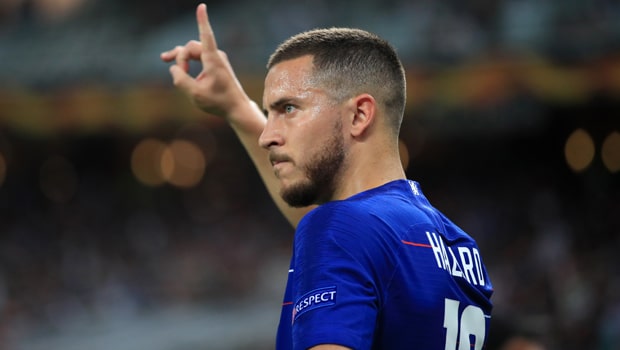 Eden Hazard has been presented to Real Madrid fans at the Bernabeu and said that he wants to win many titles with his new club.

Thousands greeted his arrival from Chelsea and after signing a five-year contract, Hazard said he had made the move to help Real get back to the top.

It was a disappointing 2018-19 season for Real as they finished third in La Liga and, having been Champions League winners for the past three years, they lost in the round of 16.

Hazard will hope for a better season with his new club and told the crowd: “I want to win many titles with Real Madrid, in this shirt. This has been my dream since I was a child and now I’m here. I just want to enjoy this moment.”

Hazard also revealed there was interest from Real last summer, adding: “After the World Cup there was contact, but I stayed at Chelsea for another season.

It promises to be a summer of upheaval at the Bernabeu, with Zinedene Zidane back in charge. Speculation remains over the future of many players, including Gareth Bale, while Hazard has been joined at the club by Luka Jovic signed from Eintracht Frankfurt.

This pre-season sees Real Madrid in the USA competing in the International Champions Cup before returning to Europe to play Tottenham in Munich.

Real Madrid are 2.20 to win La Liga next season, with defending champions Barcelona 1.62 and Atletico Madrid 17.00.