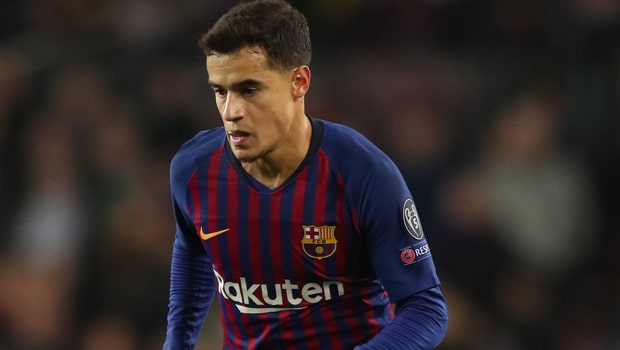 Philippe Coutinho says he cannot be certain that he will still be a Barcelona player next season amid speculation of a move back to the Premier League.

The midfielder joined Barca from Liverpool just over a year ago and scored in his team’s Champions League victory over Lyon in midweek.

That win gave Barcelona a place in the quarter-finals but it was a rare highlight in what has been a difficult first full season at the Camp Nou for the Brazilian.

Coutinho has started 16 league games for the club, scoring four goals, with three more in the Copa del Rey.

He has been linked with a move back to the Premier League in the summer, with Manchester United a possible destination, and he told a Spanish TV station his long-term future was unclear.

He said: “In the last few weeks, months even, I’ve not been playing well, but I still want to improve. “I came to Barcelona to give my best. I live for the moment. You never know what the future holds. I am happy with my performance (against Lyon).”

Barca coach Ernesto Valverde said Coutinho’s midweek display was important for himself and the team, and expressed hope that it had given the player some confidence ahead of the final months of the season.

Barcelona have a healthy seven-point lead at the top of La Liga and are through to the final of the Copa del Rey, where they will meet Valencia in May.