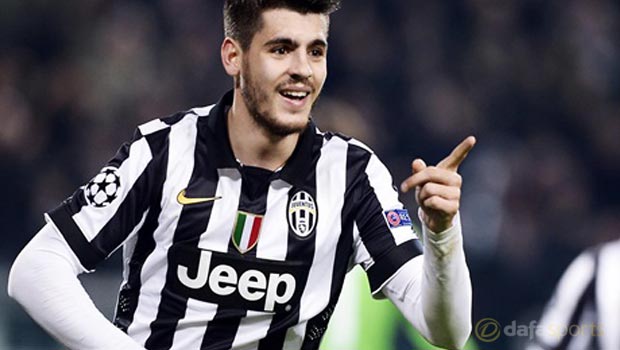 Juventus coach Massimiliano Allegri heaped the praise on Alvaro Morata after his winner at Inter Milan on Saturday.

The Italian champions secured a 2-1 win at the San Siro thanks to Morata’s 83rd-minute strike.

It was the Spaniard’s second crucial goal in four days as his equaliser in the 1-1 draw at former club Real Madrid on Wednesday secured a Champions League final spot for Juve, where they will face Barcelona.

However, the striker has now usurped compatriot Fernando Llorente in the starting line-up alongside Carlos Tevez, and Allegri says the former Real forward has established himself as a key member of the Juve squad.

However, Allegri was also happy with the collective performance of his side and welcomed the victory ahead of Wednesday’s Coppa Italia final with Lazio as Juve chase a treble, having already secured the Scudetto.

He added: “I must compliment all my guys for their performances today.
We played a great game, against an Inter side that played good football.

“In the second half, we came out very strong and I’m very happy with the will to win that we showed.

“It was important to have a good game, given that we have the Coppa Italia final on Wednesday.”

Juventus are 5.50 to beat Barcelona in 90 minutes in next month’s Champions League final or 3.00 to win the tournament outright.