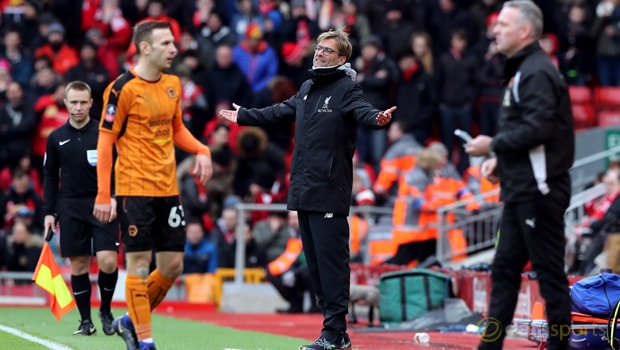 Liverpool manager Jurgen Klopp says things cannot get lower for his team after they suffered a third defeat at Anfield in seven days.

The Reds crashed out of the FA Cup following a 2-1 loss against Championship strugglers Wolves.

Last Saturday, Klopp watched as his team went down 3-2 to then-bottom-of-the-league Swansea City while in midweek they were not able to turn around a first leg deficit when Southampton came calling the EFL Cup semi-final – Shane Long netting a late winner for the Saints.

Klopp has been at Liverpool since October 2015 and had not previously lost three games in succession.

His side face Premier League leaders Chelsea at Anfield in midweek, with the challenge now to avoid losing four straight home games for the first time since 1923.

The German says things cannot get any worse and he wants his players to use the position they find themselves in to help turn a corner.

“If someone asks if this is the lowest point of my Liverpool time until now, I don’t know,” he said.

“But if it is it is a perfect moment to turn because it is not possible to go lower.

“I don’t think it is the right time to talk about being positive or optimistic. In this moment we feel really bad.

It is absolutely right that it feels bad and we have to use it in this moment.” Klopp hinted that confidence has become an issue in the Liverpool dressing room.

“We spoke about confidence a few months ago and I said it’s a little flower. If something bounces on it, then it’s away,” he added.

“Obviously, that happened kind of, but it’s not that we play without confidence. I can see a lot of moments when we really still believe in our skills.”

Liverpool are 2.50 to beat Chelsea on Tuesday, the visitors are 2.88 for the Anfield clash while the draw is 3.10.