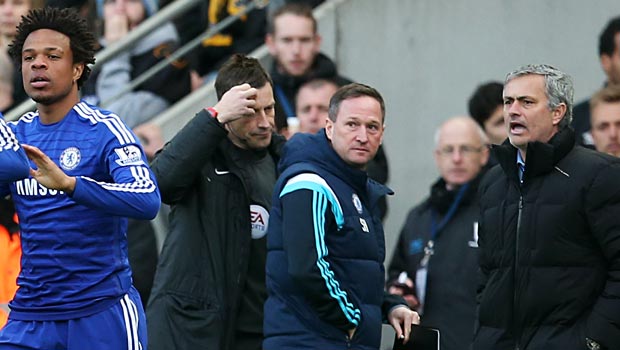 Jose Mourinho is backing fringe striker Loic Remy to keep Chelsea’s Premier League title charge on track after confirming that Diego Costa faces a spell on the sidelines after suffering a hamstring injury in Sunday’s 3-2 win at Hull.

The Blues boss was left frustrated after Spain international Costa limped off at the KC Stadium with 15 minutes remaining, but that disappointment turned to joy when his replacement Remy stepped off the bench to score the winning goal two minutes later.

Mourinho revealed that Costa came off because he felt the hamstring which has given him problems in the past, while there is a possibility he might not return to face Stoke on Easter weekend after the two-week international break.

But with Remy and veteran Didier Drogba available to call upon if Costa is sidelined, Mourinho is confident his side will keep scoring as the win at Hull restored their six-point lead over Manchester City at the top of the Premier League table with nine games remaining.

“Remy, every time he plays for us he gives us everything,” he said. “Sometimes his movement, sometimes his defensive contribution, sometimes the goal to give us extra two points. I’m pleased for the boy, he’s a fantastic kid.

“Costa has a problem, no doubts about it. The team needs goals and a striker comes off with 15 minutes to go.

He has experience with the hamstrings and he knows clearly that he has an injury, but if he cannot play the next game in 15 days against Stoke we have Remy, we have Drogba.”

Chelsea are now 1.05 to lift the Premier League title, while they can be backed at 1.27 to defeat Stoke at Stamford Bridge in their next game on April 4. The Potters are 11.08 and the draw is 5.20.