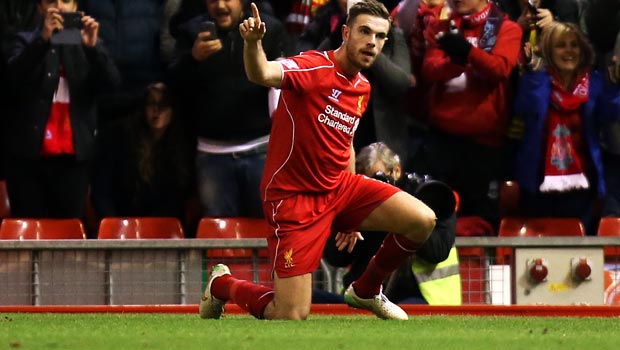 Liverpool’s push for a place in the top four continued in earnest at the Liberty Stadium as a somewhat fortunate goal, credited to Henderson, moved them within two points of Manchester United, who occupy the final Champions League spot.

After a slow start to the season, Liverpool are now unbeaten in 13 league games and Henderson says confidence could not be higher going into this Sunday’s game against United at Anfield.

“We can’t wait,” he said when asked about the United game. “We’re high on confidence, we’ve got great momentum.

“United played well the other day and it will be a tough one but at Anfield we’ll go into the game full of confidence and will hopefully get the result we need.”

Liverpool were outplayed by Swansea in the first half and were lucky to still be on level terms, before Reds boss Brendan Rodgers switched tactics in the second half.

It paid off, but there was still a touch of fortune about the winning goal as Jordi Amat’s attempted clearance ballooned off Henderson and into the back of the net.

Rodgers has also paid tribute to his players for fighting their way back into Champions League contention following a slow start.

“It’s monumental,” he said. “We’ve not done anything yet but from where we were at the beginning of the season, the intent we’ve shown and the work we’ve had to put in to claw it back and give ourselves a fighting chance is fantastic.

“Our aim is to finish as high as we can. It’s not to finish fourth. With Man City losing there’s an opportunity there to push on.”

Liverpool are 2.07 favourites to beat United on Saturday, with the visitors priced at 3.38 and the draw on offer at 3.44.