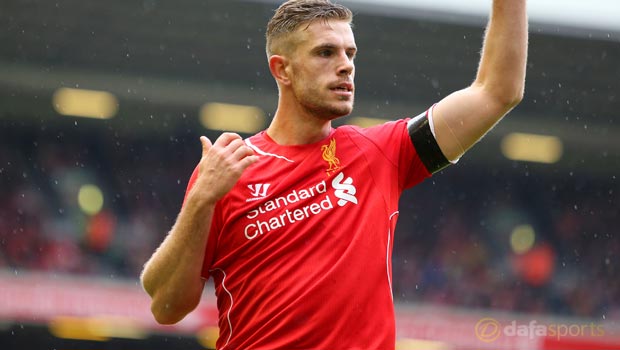 Liverpool have confirmed Jordan Henderson has been named as the new club captain after the departure of former skipper Steven Gerrard to LA Galaxy this summer.

The 25-year-old was widely expected to be handed the armband after leading the team on several occasions last season and the midfielder has now got the job on a permanent basis.

Henderson arrived at Anfield from Sunderland in 2011 for a fee believed to be in the region of £20million and, after an initial shaky start, the midfielder has cemented his position in the first-team.

Liverpool endured a disappointing season last year as Brendan Rodgers’s side could only manage sixth position but they will be featuring in the Europa League.

Optimism is high after the arrivals of James Milner, Danny Ings, Nathaniel Clyne and Roberto Firmino this summer and Henderson, who praised the influent of Gerrard, is hoping to deliver success to the fans.

“I’ve learnt a lot off Stevie and how he conducted himself as the captain of this club both on and off the field,” he said. “You’ll always learn from top players – and Steven was exactly that. I’ll use what I learnt from him to help me, but I also have to do things in the way I think is right.

“I’ll carry on from what I was doing last season and I’ll also try to take on more responsibility for the team and my teammates. We all have the same goal – and that’s to bring success to this club and our incredible supporters.”

Liverpool are priced at 26.00 to win the Premier League this season while they are a 9.00 shot to finish as the top North-West club.