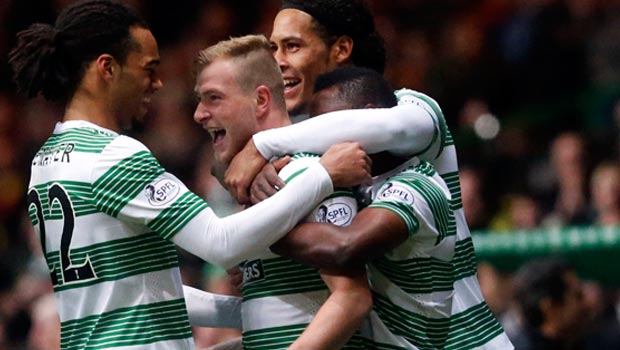 The 22-year-old Swede, who is on-loan from Manchester City, helped the Bhoys to a convincing Scottish League Cup win over a ten-man Partick Thistle side.

Emilio Izaguirre grabbed his first Celtic goal in four years and Leigh Griffiths came off the bench to score twice in the win at Celtic Park.

The visitors’ last win at Parkhead came back in 1992, with their last League Cup success over Celtic being their famous 4-1 final triumph under Davie McParland in 1971.

However, they never looked likely to repeat history as Ronny Deila’s men were always in complete control.

After the game, the Hoops boss lavished praise on his side, saying: “The second half was fantastic. We created a lot of chances and we opened them up.

“They went down to 10 men and it was difficult for Partick Thistle, but he deserved the red card, so that’s not our fault.

“We were professional, we worked hard for 90 minutes and we created chances and a lot of good moments in the second half.”

After a difficult opening to the season, Celtic currently sit 4th in the Scottish Premiership, but Deila is confident his side are picking up.

“We have five clean sheets in nine games now, so defensively it’s good and offensively we still have to get things quicker, but I think we are going the right way,” he added.

Celtic host Inverness on Saturday, and are 1.32 to claim their 7th win of the season.