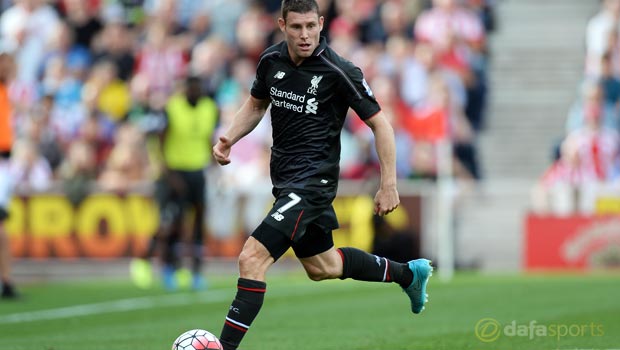 Liverpool’s summer arrival James Milner says it is a “great honour” to be named vice-captain as he aims to help the younger players in the team learn.

The England international arrived at Anfield on a free transfer after his contract at Manchester City expired and, despite having only been at the club for just over a month, the midfielder has been handed extra responsibilities.

The 29-year-old, who has also played for Aston Villa, Leeds and Newcastle United, will be deputy to new skipper Jordan Henderson, who has taken over from Steven Gerrard.

Milner did play alongside his captain in Sunday’s 1-0 win over Stoke City but the midfield duo may need some more time to gel after what was an unconvincing display.

But for Philippe Coutinho’s superb long-range strike, the Reds would have left the Britannia stadium with only one point, with the the Brazilian ensuring Brendan Rodgers’ side made a winning start.

Milner is one of eight new arrivals this summer, with Roberto Firmino, Danny Ings, Christian Benteke, Edvard Sandvik, Adam Bogdan, Nathaniel Clyne and Joe Gomez all joining on permanent deals, and the Englishman is hoping he can play a big part as the vice-captain.

“It’s an amazing honour. Liverpool is an amazing club to be at,” he said. “I don’t think it will change my role in any way; you need a lot of captains, vice-captains and leaders and people who are going to talk and help each other out.

“But it’s a great honour and hopefully I can help the younger guys along, because there is so much young talent here as well.”

Liverpool are next in Premier League action on Monday when they welcome Bournemouth to Anfield and the hosts are 1.50 favourites, a draw is 4.33 while the visitors are outsiders at 7.00.