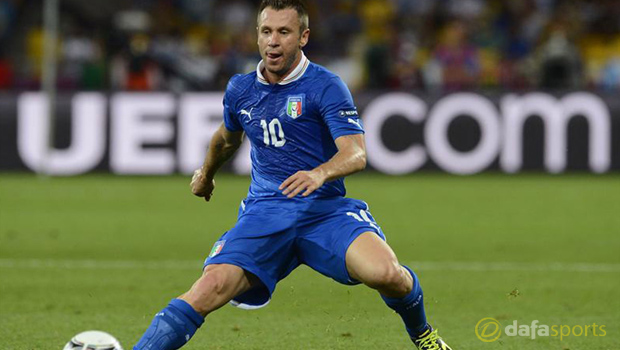 Italy forward Antonio Cassano admits that he is desperate to represent Italy at Euro 2016 although he concedes he is unlikely to earn a place in Antonio Conte’s squad.

The 33-year-old won the last of his 39 caps during the 2014 World Cup in Brazil, where he failed to make an impact in two substitute appearances for the Azzurri.

The former Roma player’s international career appeared to be over, but after featuring on a regular basis for current side Sampdoria this season he has not completely given up hope of earning a surprise recall.

Cassano said: “It is almost impossible, but I hope so. And if it doesn’t happen, I’ll support Italy from home.”

The striker, who has never been too far away from controversy during his career, insists he has now matured as a player and is ready to give everything for his country.

He added: “Conte wants players who will sacrifice themselves, and I have changed my attitude, even in training.”

Cassano has represented Italy at the last three European Championships, scoring twice at his first major tournament in 2004 and once as the Azzurri reached the final in 2012.

Conte’s side have been drawn against Belgium, Sweden and Republic of Ireland in Group E of this year’s finals and they are 2.75 to win it.

The Azzurri, who last won the tournament in 1968, are 17.00 to replicate that success in France and secure their fifth major international title.