Julen Lopetegui refusing to get carried away 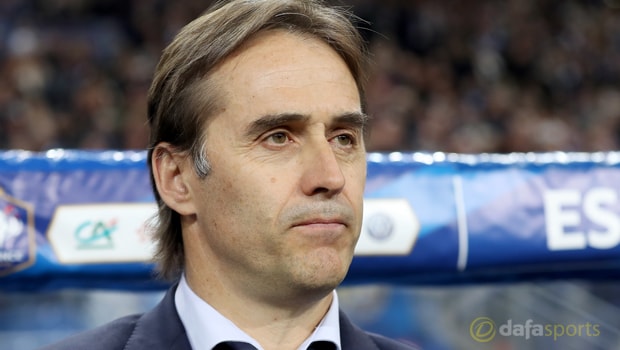 Coach Julen Lopetegui insists Spain cannot afford to look too far ahead despite cruising past Argentina in a friendly on Tuesday night.

Coach Julen Lopetegui insists Spain cannot afford to look too far ahead despite cruising past Argentina in a friendly on Tuesday night.

Real Madrid playmaker Isco scored a hat-trick in Madrid to help his side beat the 2014 World Cup finalists 6-1.

Atletico Madrid’s Diego Costa opened the scoring before Isco grabbed his first, although Argentina pulled a goal back through Nicolas Otamendi.

However, that was their only plus point as Isco grabbed two more and was joined on the scoresheet by Thiago Alcantara and Iago Aspas.

Spain are now unbeaten in 18 matches but Lopetegui insists they must not overlook some of their opponents at the 2018 World Cup.

He told reporters: “I am very satisfied with a win against the finalists of the previous World Cup.

It is an opponent that has a fantastic history, but nothing else.

“Another thing is how we manage this euphoria. We know where we are, which is going calmly because we know what a World Cup is about.”

Argentina coach Jorge Sampaoli insists he takes the blame for the defeat and the pressure will now be on before they travel to Russia in June.

“I take the blame for the goals, don’t point to the players,” he said.

“The difference [between the sides] in the game wasn’t as large as the result.”

Spain are priced at 7.50 to win the World Cup, while Argentina are available at odds of 9.50.