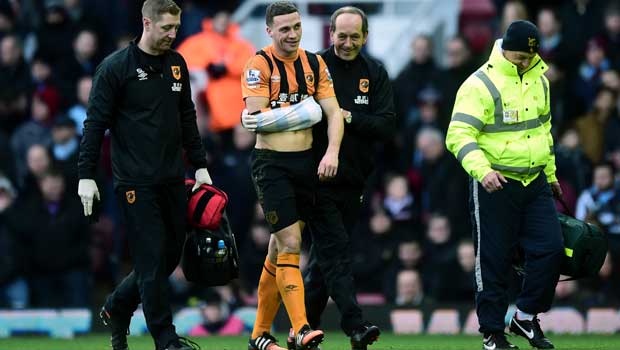 Hull City defender James Chester faces a three-month spell on the sidelines after it was confirmed he needs surgery on a dislocated shoulder.

The 26-year-old former Manchester United player sustained the injury last weekend when he fell awkwardly in the 3-0 defeat at West Ham United.

Chester was taken to a London hospital before follow-up scans confirmed he will have to endure an operation to rectify the problem.

The Wales international is expected to miss at least eight Premier League games with his return to action pencilled in for mid-April.

It is the latest blow to Tigers manager Steve Bruce who is now without nine first-team regulars.

Alex Bruce looks set to miss Hull’s next Premier League match against Newcastle United on January 31, which the Tigers are 2.60 to win, with the thigh muscle injury he sustained against the Hammers, while Robbie Brady, Abel Hernandez, Nikica Jelavic, Liam Rosenior, Alex Robertson, Mo Diame and Robert Snodgrass are all currently sidelined.

Senegal international Diame should be back in full training in early February as he steps up his recovery from a knee injury, but he has already missed nine games.

Meanwhile, Hull are being linked with Lokomotiv Moscow striker Dame N’Doye, who is also interesting Swansea City and Crystal Palace.

Bruce is desperate to land a new striker as Hernandez and Jelavic remain in the KC Stadium treatment room.

The 29-year-old N’Doye will be available on a free transfer in the summer but Hull are willing to meet the Russian side’s valuation of the player, which is believed to be in the region of £2.3million.