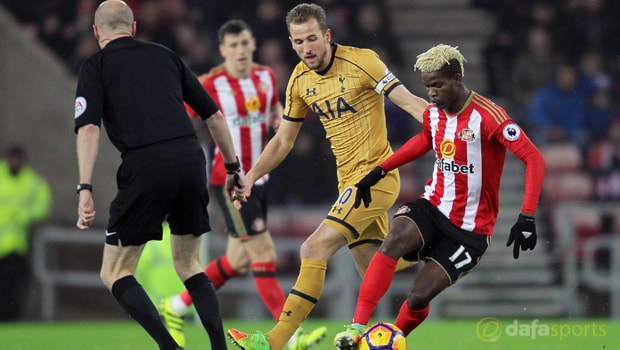 Tottenham cannot afford to miss a second chance in a week to make up ground on the teams around them says Harry Kane.

Spurs were held to a scoreless draw by struggling Sunderland at the Stadium of Light on Tuesday while league leaders Chelsea and fourth-placed Liverpool were playing out a 1-1 draw at Anfield.

Tottenham’s north London rivals Arsenal meanwhile were losing at home to Watford and Kane insists the news of other results going their way only heightened the sense of frustration that they could not claim maximum points in the north east.

Spurs are second on goal difference ahead of Arsenal, with Liverpool and Manchester United just a point behind on 46 points each.

Chelsea’s lead is now ten points at the top and Kane knows the importance of beating Middlesbrough at White Hart Lane this weekend.

Arsenal visit Stamford Bridge to face Chelsea on Saturday lunchtime and the England forward says Spurs have got to take advantage of one of the two sides around them – or possibly both – dropping points.

“It’s very frustrating, especially when you come in and find out the teams around us dropped points as well,” Kane said of the draw against David Moyes’ men.

“We’ve got another important game at the weekend, Arsenal and Chelsea play each other as well so one or both of them might drop points and we’ve got to be ready to capitalise.”

Reflecting on the draw with Sunderland, Kane insisted Spurs should have faced ten men for the best part of an hour following a dangerous tackle from Jack Rodwell on Mousa Dembele in the first half that earned only a caution from Lee Mason.

“I think Mousa getting kicked knee-high on the pitch…If you go up to anyone on the pitch and kick them knee-height on purpose, it doesn’t matter if it’s a ‘tactical foul’, let’s say, it’s a red card,” he added.

Spurs are 1.25 to beat Middlesbrough on Saturday while Kane is 4.33 to be leading scorer in the Premier League this season.