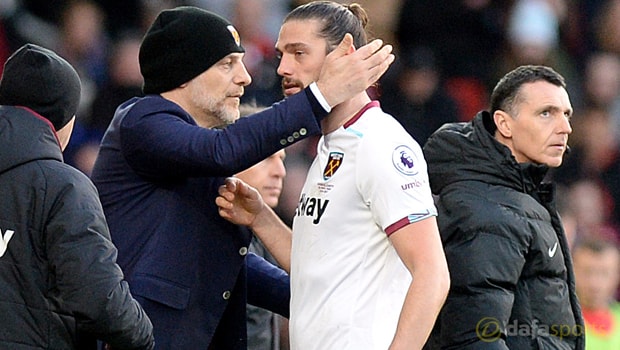 West Ham boss Slaven Bilic remains unsure as to whether or not striker Andy Carroll will be fit for Saturday’s trip to Watford.

Carroll missed the 2-2 draw with West Brom last time out due to a groin injury and Bilic feels the clash at Vicarage Road may come too soon for the striker but he refused to rule him out completely.

The Hammers were without a game last weekend so Bilic took the squad to Dubai for a warm-weather training camp, but Carroll was unable to take part in full training.

“Maybe he has a chance to be in the squad for the Watford game on Saturday,” said Bilic, as reported by Sky Sports.

“I was expecting Andy Carroll to train in Dubai but it is a bit slower than we expected.

“I don’t want to rule him out of Watford. But it’s Thursday and he didn’t train since the game he got injured in, against Southampton. But in the end you never know.

We will see. If he can run today and train tomorrow [Friday] then maybe. “If he would be available for Watford it would be great – if not, then Chelsea [on March 6].”

Carroll has been in fine form this season with six goals but injury has restricted him to just 12 Premier League outings and Bilic concedes the striker’s niggling issues are a source of frustration.

He added: “I can only repeat that, when he is fit and playing, he is a top striker for me. “I told him in Dubai that those small things that are damaging or affecting his return are no good for him, no good for us, and no good for an England call up.

“I similar thing happened last year, when he was great in the beginning but he got injured, and didn’t play for a few weeks.”