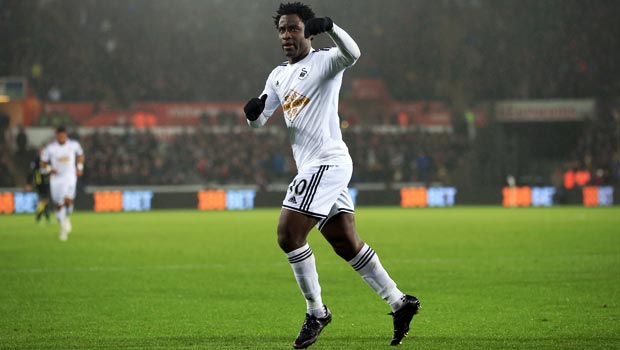 Swansea playmaker Gylfi Sigurdsson insists that it is crucial the club do everything possible to retain the services of striker Wilfried Bony as Manchester City have expressed an interest.

The Welsh outfit have started the campaign well and find themselves ninth with 16 games played with a few dropped points of late seeing them slide down the table slightly.

Bony who can be backed at 41.00 to finish the league’s top scorer has been integral to helping the Swans maintain their positive start and he has bagged eight so far this season after netting his latest in the meeting with Tottenham at the weekend.

The Ivorian was linked with a number of clubs in the summer with Arsenal said to be leading the way but an offer never transpired.

However, with defending champions Manchester City enduring somewhat of a striker crisis they have emerged as possible candidates to approach the 26-year-old.

Manuel Pellegrini recently confirmed: “We’ll see first of all options, we have options in January.

“After that we will find an option for our team, we will see if the other club wants to sell the player. It is not easy in January to make a transfer.”

Sigurdsson, who secured his return to the Liberty Stadium over the summer, feels that Bony is ‘vital’ to the way they play and admitted it would be a huge loss if he was to be sold.

Sigurdsson said: “Wilf is a vital player for us.

“He scores a lot of goals and is a big threat. If he gets a chance, then nine times out of ten he will finish it.

“Physically, he is very strong but he has got good movement and times his runs really well.

“Everyone at Swansea hopes he will stay. I am sure the club would be delighted if they could keep him for another season.”