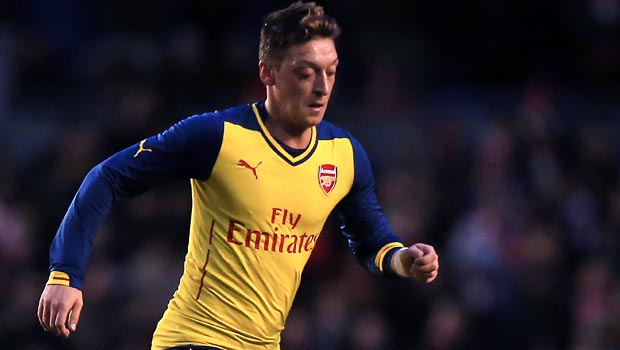 The Germany international moved to the Emirates from Real Madrid for £42million in the summer of 2013 as Arsene Wenger smashed the club’s transfer record.

After a promising start, his performances have declined and he has been criticised by pundits and supporters this season.

Many fans remain unconvinced by Ozil who will come up against former Real Madrid team-mate Angel Di Maria when Arsenal face Manchester United in an FA Cup quarter-final on Monday.

Di Maria has also been subject to much deliberation after a series of poor displays for United and Neville reckons the way the two players left Madrid has impacted on why they have failed to hit the ground running in England.

He wrote in the Daily Telegraph: “Just like Di Maria, Ozil was pushed out of Madrid and he has since struggled to be the game-changer that I believe a £42million player should be for Arsenal.”

The former United defender and current Sky Sports pundit feels Ozil has failed to perform to the expected standard when Arsenal have faced their toughest opponents in both England and Europe.

“Although Arsenal fans often complain when I highlight Ozil’s shortcomings, my response is that I generally see him in the bigger games against the top opponents and he has not delivered,” Neville added.

“In 22 games against Chelsea, United, City, Liverpool and Tottenham, plus Champions League appearances, he has scored just two goals.

“It is not enough for a player of Ozil’s ability, he does not influence games as he should.”