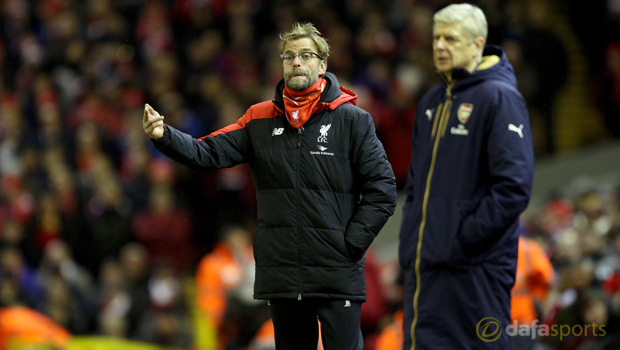 Mutual respect between the managers will go out of the window on Wednesday night when Liverpool host Arsenal in the Premier League.

Reds boss Jurgen Klopp is a known admirer of Gunners counterpart Arsene Wenger, with the pair both keen on attacking football with plenty of possession.

The north London outfit will arrive at Anfield sitting at the top of the Premier League table, with 42 points from 20 games played, while the Merseysiders are eighth, having garnered 30 points this term.

Arsenal, 2.60 to win the match, have genuine title ambitions and, with Chelsea and Manchester United seemingly out of the picture, it may well be their turn for glory.

Games against the top sides are therefore vital and, while not in the race themselves, Liverpool, who are on offer at 2.80 to take all three points, possess enough quality to beat any side on their day.

Klopp knows that his men will be up against it and feels the opposition can hurt teams in many different ways.

“Arsenal are not only a good possession team, that’s the problem, they have good counter-attacks too and that’s what you have to be aware of,” he said.

Both teams have plenty of players who are vying for a place at Euro 2016 and games of this magnitude should allow them to showcase their skills for next summer.

And, with that in mind, Wenger is expecting the same test that his sides have always faced at Liverpool over the years.

“Every time we go to Anfield, we face a team who is up for it,” said the Frenchman. “It’s always a ferocious battle, no matter who the manager is.”