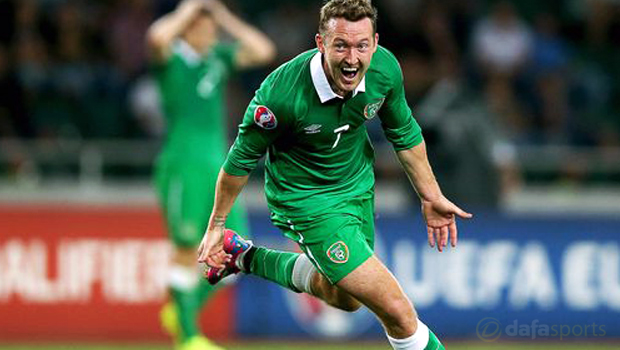 Everton winger Aiden McGeady has joined Sheffield Wednesday on loan for the rest of the season, in an attempt to boost his playing time ahead of Euro 2016.

The Republic of Ireland international has only made one appearance for the Toffees this season, and that came way back in August when he played 45 minutes of a League Cup tie against Barnsley.

The 29-year-old will now be hoping to feature on a more regular basis for Carlos Carvalhal’s Championship promotion hopefuls, as he bids to secure a place in Martin O’Neill’s Ireland squad for this summer’s European Championship.

McGeady has won 79 caps for his country since making his debut in 2004, and he was part of the Ireland team that participated at the last Euros in 2012.

Carvalhal knows how important it is for McGeady to go to Euro 2016, and he believes the temporary switch could be beneficial for both player and club.

“He has a big personal challenge because he wants to be in the European (Championship) with the national team,” said the Wednesday manager.

The Portuguese coach is confident his new recruit has all the qualities to improve his side, as the Owls aim to secure promotion to the top flight for the first time since the year 2000.

He added: “You want to bring these players to your team because they have quality. He’s a player that can improve the team and will help us in the second part of the season.”

McGeady will then be hoping to help Ireland at Euro 2016, where they have been drawn against Belgium, Italy and Sweden in Group E of the competition.

The Green Army are available at 2.38 to progress to the knockout stages and they are on offer at 10.00 to win the group.