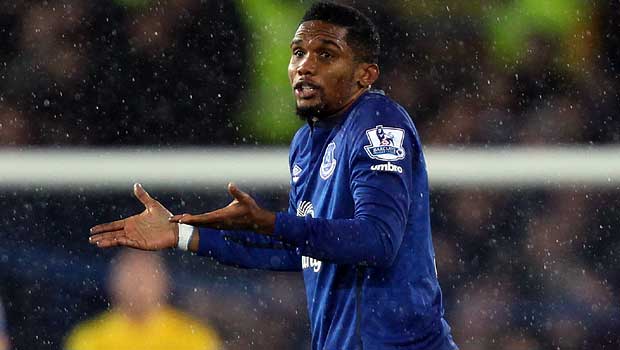 Samuel Eto’o has reportedly agreed terms with Sampdoria and the Italian club is hopeful the Everton striker will complete a medical on Monday before securing a deal.

The 33-year-old only moved to Goodison Park in the summer on a free transfer after his contract with Chelsea expired, but the former Cameroon international looks to be heading over to Serie A.

The striker has featured 14 times for the Toffees in the Premier League this season and managed to find the back of the net on three occasions.

However, a large proportion of these appearances have come from the bench as manager Roberto Martinez has preferred to start Belgium international Romelu Lukaku up front.

Eto’o has been used mainly as a Cup player this season, with the former Barcelona star featuring heavily in the Europa League, playing four of the six group matches as Everton progressed to the knock-out stage of the competition.

The lack of starting opportunities appears to have forced Eto’o into an early exit from Goodison Park and the striker is expected to undergo a medical on Friday in Italy.

Sampdoria are hopeful they can complete a deal in time for the Italian Cup tie with Inter Milan on Wednesday at the San Siro.

Roberto Mancini’s side are the firm favourites to pick up the win at 1.79 on home soil while the visitors, who could have Eto’o in the squad to play against his former club, are the outsiders at 4.40.

The only delay in the deal being completed seems to be from the Everton manager Roberto Martinez, who recently said the striker’s future will be decided in the next two weeks, meaning a transfer may not happen until the end of the January window.