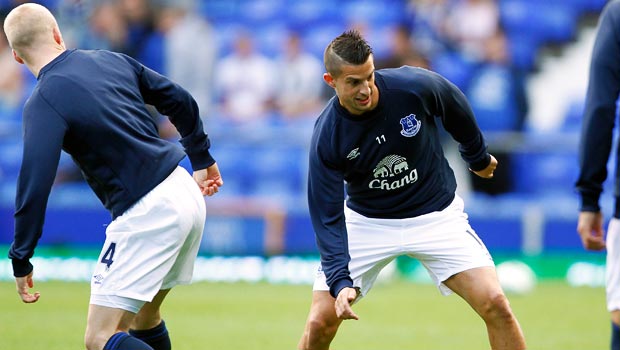 Everton forward Kevin Mirallas is confident that they can defeat Merseyside rivals Liverpool at Anfield on Saturday while their new-look squad is continuing to adapt to each other.

The Toffees have not won at the home of the Reds in the Premier League for exactly 15 years to the day and they travel across Stanley Park not in the best of form having only picked up five points from as many games so far.

However Brendan Rodgers’ Liverpool, who finished last season in second spot, have also endured a stuttering start with just one point more on the board.

It comes after a summer transfer window which saw the Reds’ top scorer Luis Suarez depart for Barcelona and a host of new faces come into the team.

And with the new boys, including Italian striker Mario Balotelli, still trying to bed in and gel with the players who were at Anfield last season, Mirallas can see a chink in the armour which he feels Roberto Martinez’s side can exploit.

The 26-year-old Belgium international said: “Liverpool are totally different this season, I think we can beat them this time for sure.
They are really different to last season, with a lot of new players.

“I know myself how hard it is when you go to a new country. When I came here from Greece at first I struggled because the leagues are totally different – it’s non-stop.

“They lost [Luis] Suarez, who was the big player for them last season.
They will be a different team against us; Liverpool have a new striker, a new defence, and that’s very difficult for a team.

“Players need time when you go to a new club so I think I tell you they’re different from last season, like I say, with a lot of new players and we are confident.”