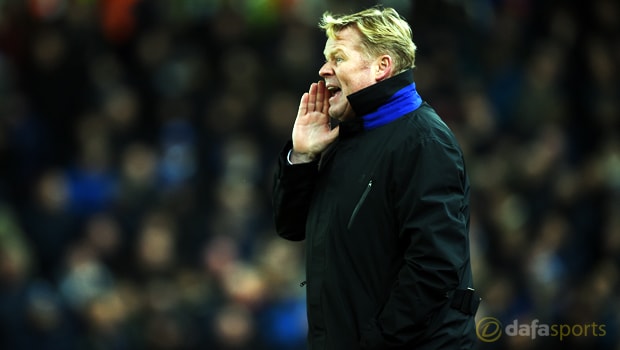 Everton defender Ashley Williams hopes the club can keep hold of manager Ronald Koeman for as long as possible.

Koeman has been linked with a summer return to Barcelona, having enjoyed a six-year spell at Camp Nou as a player, amid doubts over the future of current boss Luis Enrique.

The Dutchman has played down the rumours he could be set to take charge of the Catalan giants on a number of occasions but the speculation, both in England and Spain, has refused to die down.

Williams was signed by Koeman last summer and the defender hopes the 53-year-old is not tempted by a move away from Goodison Park at the end of the season. “We love the gaffer.

It is clear to see that all the players have such a good relationship with him,” he told the Liverpool Echo.

“We wouldn’t want to lose him. But it is his own career, so he has to do whatever he has to do. We would like to see him there as long as possible.”

Everton welcome Sunderland to Goodison on Saturday and they are 1.40 to claim a win or 9.00 to secure a 3-0 victory.

Williams believes the key to Koeman’s success at Everton, and former club Southampton, is his focus on defence.

“He was one of the best centre-backs that ever played football in the history of the game,” he added.

“You have an unbelievable amount of respect for him, straight off the bat.

“You can’t always play well. But I think he doesn’t accept a day off here or there, or taking a break in part of the session. “As a centre-back, he is like most.

He wants you to defend with your life, try and play with the ball when you can and not over play.

It is the usual. He doesn’t go too in depth with me, anyway. “It is more of the mentality that he is trying to instil in the squad.”