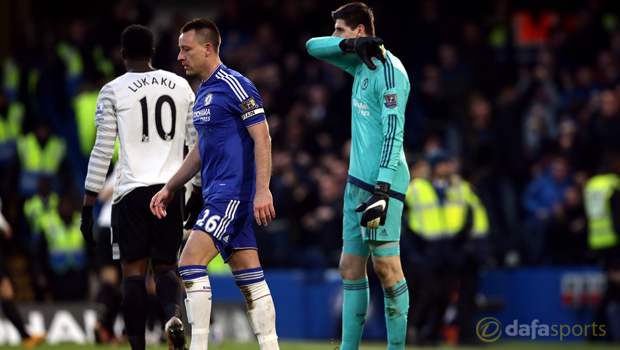 Roberto Martinez could scarcely contain his anger after his Everton side were denied a win over Chelsea by John Terry’s goal eight minutes into stoppage time.

The Chelsea skipper rescued a point for his side deep into stoppage time, levelling it at 3-3 after Ramiro Funes Mori scored in the 90th minute to seemingly win the day for Everton.

Terry had earlier scored an own goal to break the deadlock before Kevin Mirallas doubled Everton’s lead on 56 minutes.

Diego Costa and Cesc Fabregas got Chelsea back in it with two goals in two minutes shortly after the hour mark, before the stoppage time fun and games commenced.

Martinez felt aggrieved on two counts. Seven minutes of added time were signalled by the officials and Terry found the net 57 second over the allotted time.

To add insult to injury, the defender was in an offside position when he scored and the Everton boss was not amused in the aftermath.

“The level of refereeing was diabolical,” he told Sky Sports after the game. “All you want is the referee to do his job. The linesman is in a good position, it’s a touch from Oscar and Terry is clearly, clearly offside.

“It’s a clear-cut offside that should have been spotted. To make it worse, it’s 50 seconds over time.

“It’s something that’s not good enough.”

It is the second time this season that Everton have been cruelly denied late in a game, they were also forced to settle for a 3-3 draw at Bournemouth in November when the home side scored deep into stoppage time.

Martinez’s view on the Terry goal was shared by his opposite number, Guus Hiddink.

“[Martinez] is quite right, he was offside,” said the Chelsea boss “Sometimes it’s in our favour, I’ve seen it. Oscar touched the ball and John was offside but he made a beautiful goal.”

Everton face Manchester City in the Capital One Cup semi-final second leg on Wednesday, leading 2-1 from the first leg. The Toffees are 5.00 to win the League Cup while City are 2.75.