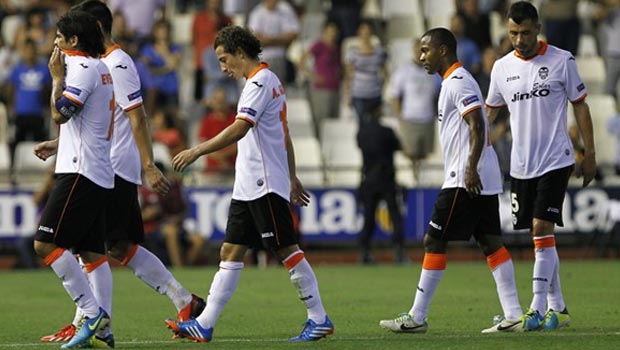 Valencia coach Juan Antonio Pizzi believes his players can overturn a three-goal deficit and beat FC Basel on Thursday to reach the Europa League semi-finals with a ‘valiant’ effort and the backing of their home fans.

The 2004 UEFA Cup winners were stunned by a 3-0 defeat in Switzerland a week ago when Basel were forced to play in front of an empty stadium because of a sanction.

A Matias Delgado double and a late goal from Valentin Stocker left the Spaniards a huge mountain to climb, but Pizzi is convinced Los Che can progress.

“We weren’t able to score then but what if we make our chances on Thursday.

“If our fans stand behind us, if we are sharp and we make our rivals feel uncomfortable from the start, who is to say that we cannot score three or more goals and progress to the next round.

“With a valiant performance, I see no reason why that cannot be done.”

Valencia, who drew 0-0 at Valladolid on Sunday, are the 1.59 favourites to beat a Basel side that currently sit atop the Swiss Super League table.

Murat Yakin’s outfit were also involved in a stalemate at the weeked, at home to Thun, but it was enough to keep them one point clear of Grasshopper Club in the domestic standings.

Basel defender Fabian Schar has warned his team-mates not to take anything for granted at the Mestalla, where they are 4.97 to win in the 1X2 betting with the draw available at 4.00.

“It’s a great advantage we have,” he said. “We travel to Valencia with a good feeling but we still know it will be difficult.

“Valencia will surely give their best in front of their crowd.”