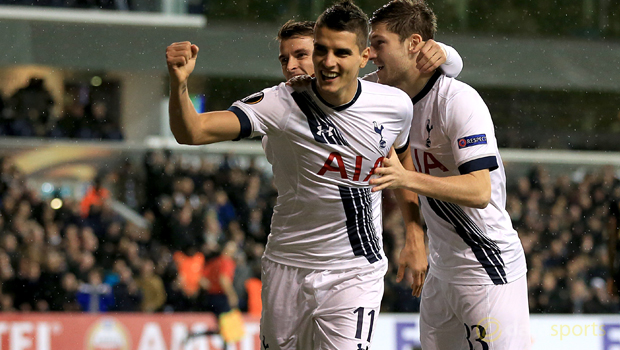 Tottenham defender Ben Davies insists he is staying positive after drawing Fiorentina for a second year in a row in the Europa League.

Spurs, who are priced at 2.25 to finish in the top four, came up against the Italian outfit at the round of 32 stage last season but were beaten 3-1 on aggregate.

After topping their group in this year’s competition the north London outfit were again handed a repeat tie but Davies feels there is no reason to panic.

Davies has been utilised primarily in cup competitions this season with Danny Rose preferred in the league and he turned out in the final group tie as Spurs beat Monaco 4-1.

The former Swansea man believes that performance, backed up with only losing twice so far this term in the Premier League this term, proves the strength of the squad.

Tottenham will play the first-leg of their round of 32 clash away from home in February 2016 before hosting the return at White Hart Lane a week later.

The Wales international feels that last season’s result wasn’t a rue representation of their performance and hopes they can avenge that exit.

Davies said: “It’s a tough draw, we’ve seen how well they’re doing this year and how good a team they were last season so it’s another big challenge for us, but we’ll be ready.

“I think on another day, especially in the home leg last year, we could have scored three or four goals so we won’t be short on confidence this time around.

“The Monaco result sets the stall out and shows what we can do in Europe. Now we’re in the last 32 where there are a lot of good teams in the competition, but we’re one of them so we’ll look to go out there against Fiorentina, stand up and hopefully pick up a result.”